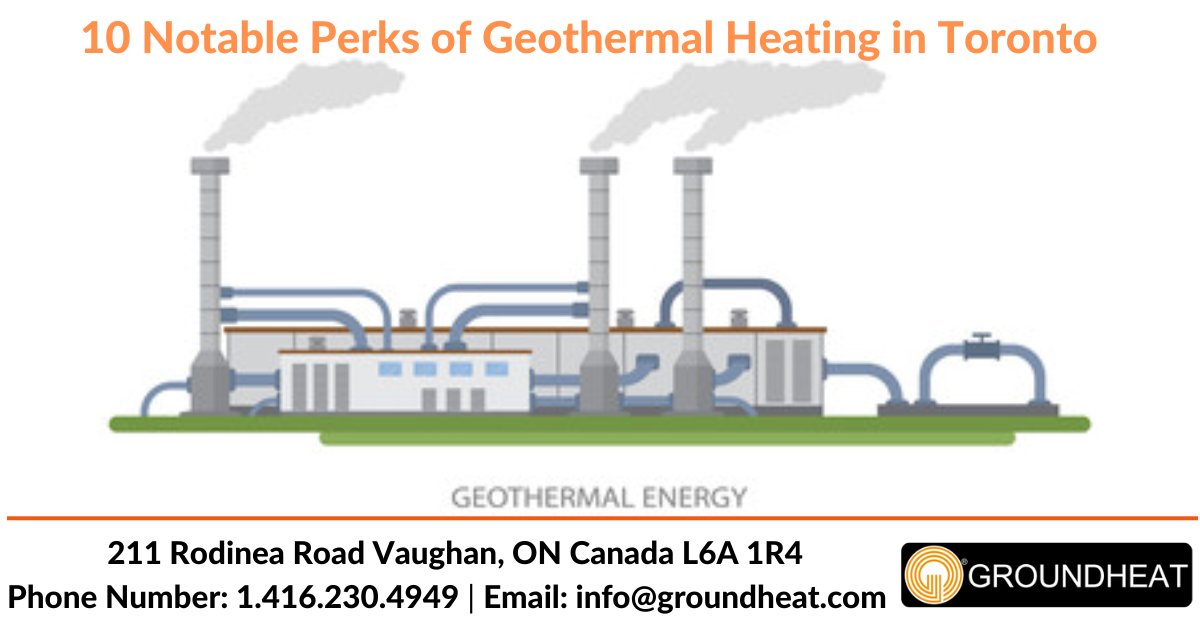 Locating the right heating option for your home is a tedious job that is dirty, expensive, and inefficient such as using fuel oil. It is no wonder that homeowners upgrade to cleaner, renewable, energy-efficient geothermal heating in Toronto. Today we will share the top five reasons individuals are making this smart switch.

The following is the list of our top ten reasons why we should consider the future in which geothermal energy is used:

Geothermal power is based on the heat energy being stored under the ground. The intense heat gets trapped in huge quantities within the water reservoirs in the earth’s crust. In reality, it is considered limitless.

Super heated aquifers are being tapped for geothermal production, which continually replenishes the geologic forces that originate in the earth’s core. These are inexhaustible natural processes making geothermal energy quite an eminently renewable resource.

Geothermal energy is cleaner since it is extracted and converted without burning any fossil fuels. These emissions from the geothermal plant mainly start from the water vapours.

Any conventional heating system depending on combustion, produces harmful carbon monoxide and fuel oil without any difference. Even before it enters the furnace, oil becomes harmful when the storage tanks get compromised. Leaks out of the oil tanks are never covered by home insurance policies and cost homeowners tens of thousands of dollars to clean up.

Geothermal from geothermal energy services Toronto never burns anything as it harnesses the ambient energy out of the earth, offering renewable heating and cooling effects. It means that it never generates any carbon monoxide and does not involve storing harmful materials on your property to work out.

There are a few greater levels of geothermal energy available across several places. There is a greater potential for geothermal development throughout Canada, with highly scaleable processes.

Geothermal often lends itself to larger and commercial scaling plant operations along with local and residential applications in the form of ground pump heating and cooling systems. There are smaller operations that are cheaper, which are dug at the shallower levels with larger geothermal power plants efficiently converting massive amounts of heat into electricity for feeding the grid.

Geothermal energies maintain perfect stability throughout the day, unlike renewable s, including solar and wind power, irrespective of the wind and lighting conditions. It is made eligible for supplying a base load of electricity to the grid.

The base load forms the main bulk of the grid’s electricity demand, and a constant and reliable power supply is required to meet such demands. The inherent stability of geothermal carries over the cost of electricity which notices fewer fluctuations.

The carbon footprint of a building may be significantly reduced by installing a geothermal system. Even while geothermal energy contains some carbon, it emits less carbon dioxide into the atmosphere than fossil fuels do. Additionally, geothermal power plants produce electricity on-site, reducing the energy required for processing and shipping expensive fuels.

Geothermal energy replaces both the cooling and heating systems in buildings. It gets both jobs done efficiently instead of the conventional air-cooled systems, with the subsurface temperatures staying constant all year round.

Furthermore, the good operational simplicity of the right system with the absence of carbon fouling due to the combustion means that the geothermal systems are easier to maintain.

Geothermal energy services in Toronto create the smallest land footprint across the major power sources. It does not need additional real estate, which is a blessing across the dense urban zones.

Furthermore, underground geothermal systems are never exposed to these components. It is vital during the weather extremities since it safeguards the main energy supplies across the natural disasters threatening the above-the-ground units.

There will never be a “peak geothermal” because of the untapped energy potential of hydrothermal reservoirs. It seriously impacts the strength of the green economy and the development of new jobs.

Geothermal energy production has exploration risks and financial pitfalls, although the risk associated with product development is lower than in many other renewable energy sectors.

And now, cutting-edge technology could enable engineers to drill further and at lower temperatures, perhaps enabling more places to get geothermal energy. This abundant source of renewable energy has a very promising future.

To make a house pay for itself in a reasonable amount of time, it would need to be fairly big and not very well insulated with geothermal heating in Toronto. Better windows, more insulation in new construction, insulating existing walls from the outside during home renovations, better tapes and membranes for air sealing, etc., could all offer much greater returns on that sizeable financial investment in heat retention than energy efficiency in many cases, especially with moderately-sized new homes being built.